The AL+ is an optimized and quick 8-bit version of the Atom IDE interface with a real-time-clock chip and a double CF-IDE adapter. The interface fits in the left or right floppy disk drive bay without the need to open up the Coupé´s case. The AL+ needs a special ROM with changed bootstrap code and some redefined keys (F7 and F8 for DIR, CNTRL+Z for RECORD), which supports booting from any of the four possible (bootable formatted) CF cards. The forced boot is done by holding the keys 1 to 4 during the start-up of the computer (or 0 for no boot). Lite means this IF has 8-bit wide databus and CF-cards are accessed in 8-bit mode. No capacity is lost and speed is even faster. 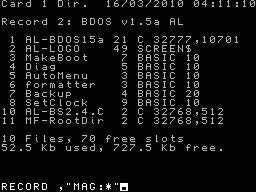 The B-DOS handles 8GB from the space of the CF card. This sets the limitation of 10000 floppy images to store.

The B-DOS features some MasterDOS capabilities: the speed, the ask option for multiple operations and the date stamping. B-DOS has not implemented directories yet, although you could name records systematically (e.g. GAM:, DEM:, MAG:, TXT:, PIC:, SRC: etc.) and then make the list with the command RECORD ,"GAM:*". Every record can be named with a 16 character name (filenames take 10 chars only).

The full command set and the detailed B-DOS description you can find in the documentation written by the author of the Atom Lite+ and the B-DOS v1.5a, Edwin Blink.

Please note the different versions of the B-DOS are used for the following Coupé´s storage devices:

The vast majority of old good Coupé´s programs should run on the AL+ without any modification. However a small amount of MasterDOS and MasterBASIC programs could need some changes.

Patches exist for these games with a direct disc-access:

Worth to mention are special versions of the SAM Paint and the the Solar Flare´s Mod Player.

The CP/M for the SAM Coupé, Pro-DOS v1.9 has been patched by Edwin Blink to work with the Atom Lite interface, see ALPD.

The formatted CF card starts with the boot sector (always a single sector), then the records list follows (each record list entry is the 16-byte text label, so there are 32 entries per sector). The next space on the disk is broken into 1600-sector-long blocks (records). In case the end space has at least 40 sectors, a short record is created, otherwise it is ignored.

Some special software for the old ATOM, like some BDOS versions don´t work because the AL doesn't swap the high and low byte like the original Atom does. This is no problem when writing and reading back the written data. But when reading out read only data like the Identifify Device data the bytes are swapped (the old ATA Device detection method as used in older BDOS does not work). 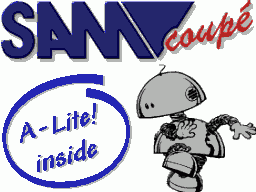 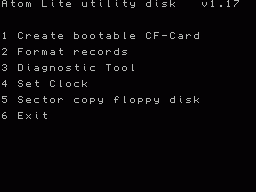 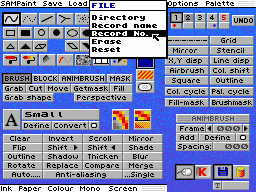 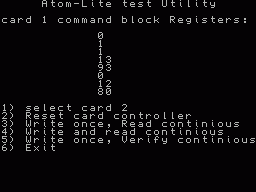 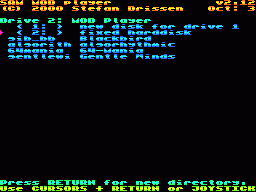