The SimCoupe is a high quality emulator that provides all Coupé´s peripherals (excluding commercial Quazar´s...) on many platforms.

The version 1.1 emulates Atom Lite+ interface. Some advanced functionalitites like screen video recording are long time in the stage of developments.

Some programs (e.g. Mandelbrot generator) are too slow in SimCoupe...

I cannot make an atom-lite-hdf option to work in the Simcoupé. What is wrong?

The Simcoupe v1.0 supports HDF images formatted for the old classic Atom with a different byte order storage. A new version of the emulator (v1.1) can detect the byte order of the media and let you use old images, created in the Simcoupé v1.0, with the emulated Atom Lite hardware. 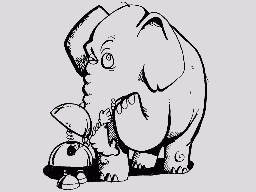 What data types could be used with the SimCoupé?

I have not a working floppy drive, how to set up a CF card for the Atom Lite(+)?

In order to install a boot sector into a real CF card, put a CF card into a USB reader, run the Simcoupe and use the physical drive option (instead of an image.hdf file, in Tools/Options settings). Autorun (BOOT) the bdos system disk image in the first floppy slot of the emulator, then follow "Atom Lite disk utility".

Or use the SAMDISK tool and follow these instructions: