This superb database program made by Petr Adámek is one of the software masterpieces from the Czechlands of 1980´s. It is menu driven and customizable for LOAD and SAVE and other I/O operation with any disk drive system (or Interface I).

Three versions were officially released, two for the ZX Spectrum, the third for the SAM Coupe. All versions store texts of databases in the middle- and east-european character code page KOI8. 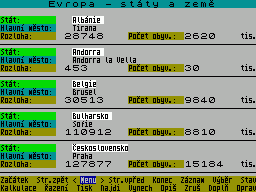